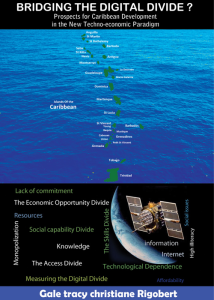 BRIDGING THE DIGITAL DIVIDE? PROSPECTS FOR CARIBBEAN DEVELOPMENT IN THE NEW TECHNO-ECONOMIC PARADIGM

Information communications technologies (ICTs) are generally viewed as the new vehicle to redress developmental problems. The book assesses the value of such claims by analyzing the structure and workings of the global political economy (GPE) and its impact on, and prospects for developing countries in the current techno-economic context. The book uses a case study of the Caribbean to illustrate the challenges and opportunities faced by small-island developing
states (SIDS) in the new techno-economic paradigm.

The question must be asked, can small island developing states such as those of the Caribbean leverage modern ICTs for growth and development against the backdrop of a yawning global digital divide?

Hence, the book addresses the central problem of the digital divide and whether emerging ICTs offer any real economic opportunities for the Caribbean region.

Dr. Gale T C Rigobert's tertiary education began at the Sir Arthur Lewis Community College, St. Lucia. Thereafter, she taught for two years at the Corinth Secondary School before moving to Trinidad & Tobago in 1993 to read for a first degree in Government at the University of the West Indies (UWI), St. Augustine, graduating with First Class Honours. In 1996, she was awarded a Swiss Scholarship which allowed her to pursue a post graduate Diploma in International Relations at the Institute of International Relations, St. Augustine.

In 1997 she won a national Cambridge Commonwealth Scholarship which afforded her the distinguished opportunity to pursue a Master of Philosophy in International Relations at the University of Cambridge, where she was awarded the title of Sir Patrick Sheehy Scholar for academic excellence. After graduating from Cambridge University she worked in the private sector in the UK as an applications developer and business consultant.

In 2002 she returned to the University of the West Indies, St. Augustine, Trinidad and Tobago where she lectured in Government and International Relations. She has also lectured at the University of Sussex in England, Anton de Kom University in Suriname and has participated in conferences in the Caribbean, Latin America, North America, the Middle East and Europe covering diverse topics such as Globalization, empowerment of women, technology and development in small island states, foreign policy and national security.

Dr. Rigobert is the author of several publications on the theme of ICTs and Development. She was guest editor of a Special Issue of the World Journal of Science, Technology & Sustainable Development entitled 'ICTs, Technological Change and Development in the Developing World', published in February 2010.

Her other publications include:
1. 'The Digital Divide: A new imperialism?' In Globalization and Governance: Essays on the Challenges for Small States. Edited by Ann Marie Bissessar. McFarland & Company, USA. December 2004.